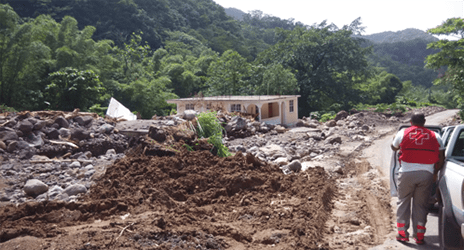 The island of Dominica sustained significant damage due to the passage of Tropical Storm Erika on Thursday, 28 August. A band of torrential rain caused by the system resulted in the deposit of 6 to 8 inches of rain in less than twelve hours and triggered massive flooding and several landslides.

The immediate national efforts were centred on search and rescue efforts. The government of Dominica requested assistance with search and rescue, medical support and damage assessment. Caribbean Disaster Emergency Management Agency (CDEMA) and other regional partners including the Pan American Health Organization (PAHO) deployed teams to the countries. The French government has provided one helicopter to assist with the search and rescue efforts. Initial reports form the French Civil Defence indicate that the most affected area is Petite Savanne (currently accessible by sea or air), an area with an estimated population of 1,200, where 20 houses were destroyed and 50 houses were damaged.

Most of the main roads were impassable and several bridges were blocked or damaged. The provision of essential services (water, electricity) has been disrupted, and landline and mobile phone service is intermittent. The agricultural sector and consequently livelihoods has been significantly impacted due to crop losses. As of 1 September 2015, the National Emergency Operations Centre (NEOC) has confirmed 11 dead and 23 people have been reported missing.

The Dominica Red Cross continues to provide immediate relief through the distribution of food and water to walk-ins and other requests for assistance. The National Society indicated that current supplies include household supplies for up to 300 families. A limited number of hygiene kits and cleaning kits are also available. Digicel and the Coast Guard have made boats available to reach communities that are not accessible by land.

The National Society and the Anglo-Caribbean regional disaster management coordinator met with the coordinator from the Office of Disaster Preparedness to coordinate the support coverage for the affected areas.

According to CDEMA Situation Report #8:

The Regional Response Mechanism (RRM) remains activated. The RRM is an arrangement for the coordination of disaster response among CDEMA Participating States, and Regional and International Agencies. The RRM is coordinated by CDEMA through the Regional Coordination Centre in Barbados.

Deployment, quantification of needs and priorities are ongoing and are being coordinated by the Caribbean Community (CARICOM) Disaster and Assessment Coordination (CDAC) team on the ground.  The National Emergency Operations Centre is also being supported by the CARICOM Operational Support Team (COST).  Additionally, CDEMA has initiated its first rotation of the CDAC and COST teams to relieve those deployed in the immediate aftermath of the event.

Updates on pledges and support

Barbados: The government of Barbados continues to support the transit of essential personnel and relief supplies from its port to Dominica.

Saint Lucia: The government of Saint Lucia continues to support the transit of essential personnel and relief supplies from its ports to Dominica.

Trinidad and Tobago: Helicopters used in the early stages of the response have completed the initial hours pledged and are now on standby for further deployment as necessary.

Caribbean Public Health Agency (CARPHA) called a meeting on 1 September of Chief Medical Officers (CMO) in the region to brief them on the current situation in the health sector in Dominica.

University of the West Indies has placed six engineers on standby who are experienced in assessment in infrastructural damage and flooding, public health, water supplies and water resource management.

Government of France: A French Helicopter is distributing relief supplies to areas that are inaccessible by road.

United Development Fund: The United Nations Development Programme (UNDP) has indicated that US$50,000 will be made accessible from 2 September onward to assist with relief support.

European Union: The European Commission is providing €300,000 in emergency humanitarian funding. The emergency aid provided by the European Union (EU) is to assist those most affected and will be distributed through PAHO. In collaboration with the United Kingdom’s Department for International Development (DFID), relief efforts will focus on: restoring access to essential health services and medical care capacity (including psychosocial support); providing safe drinking water, and ensuring proper hygiene, sanitation and waste management; and implementing crucial disease prevention activities.  Seven engineers from the European Union are also on hand to assist with the assessment of roads and bridges.

CDEMA is coordinating the Regional Response Mechanism and providing direct support to Dominica.