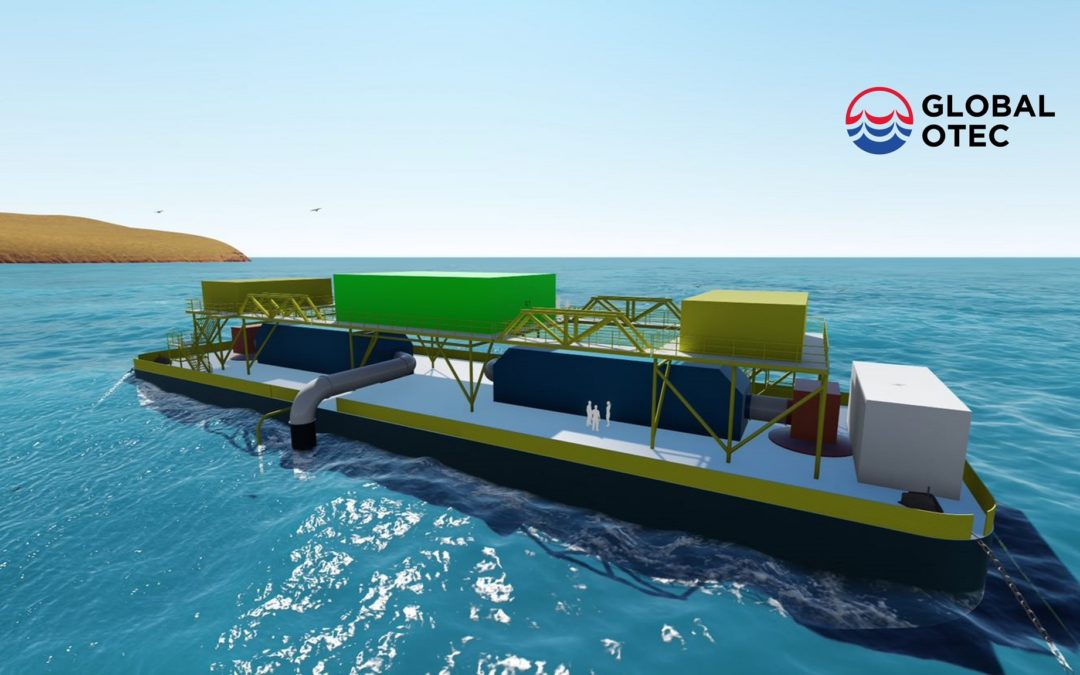 15 November 2021 –  The leaders of Small Island Developing States (SIDS) and coastal cities announced it approves the development and deployment of the first Floating OTEC Platform using the dominant form of energy generation around the world today, by the United Kingdom (UK) company, Global OTEC. In May 2021, SIDS DOCK announced that it had signed a Memorandum of Understanding (MoU) with Global OTEC, that would also see the twin-island of the Democratic Republic of São Tomé and Príncipe as the first SIDS and Least Developed Country (LDC) to pilot an Ocean Thermal Energy Conversion (OTEC) plant. São Tomé and Príncipe are located in the Gulf of Guinea, off the west coast of central Africa.

Now that the leaders of SIDS and coastal cities have given the green light to Global OTEC, a site assessment of São Tomé and Príncipe is currently underway with the private sector as the major funders. This Public-Private-Partnership involves the SIDS DOCK Institutional Partner, the United Nations Industrial Development Organization (UNIDO), which through a grant to SIDS DOCK, is partially supporting the project.

The announcement was made on 11 November 2021, during the SIDS DOCK Side Event on the margins of the 26th United Nations (UN) Climate Change Conference of the Parties 2021 (COP26) on the Call To Action! for the Establishment of the Global Ocean Energy Alliance (GOEA), held at Wood House, in Glasgow, Scotland, where before a socially-distanced audience, the leaders lauded Dan Grech, Founder and Chief Executive Officer (CEO) of Global OTEC and the private investors as “globally responsible citizens who have claimed their stake in ocean energy, which they know have high growth potential.” The Side Event was held in partnership with UNIDO and the US-based Stimson Center Alliance for a Climate Resilient Earth (ACRE).

In his presentation, Grech noted that the understandable thing about the Floating OTEC Platform is that it operates like a traditional oil platform, the difference he said, is that they are pumping ocean water, not oil. “This is the defining and innovative separation about OTEC technology, it provides clean, environmentally-friendly energy that can provide baseload power, all of the time. The Global OTEC Floating Platform needs two crucial elements to function efficiently – access to a large source of warm and cold water, and a reasonable transmission distance to shore. “These two criteria should come as no surprise that this is available across nearly every SIDS,” he said.

The Honourable Rev. Dr. Pohiva Tu’i’onetoa, Prime Minister of the Kingdom of Tonga, in his capacity as President of the sixth session of the SIDS DOCK Assembly, noted during his keynote address that the Global OTEC team knows the rate of failure is minimized because OTEC Technology has been around since the eighteen hundreds (the 1800s), and if it is good enough for the United States Navy to support the development of a one hundred and five kilowatts (105-kW) demonstration OTEC plant in Hawaii, that has been supplying electricity to the local electricity grid for the past six (6) years, then OTEC is even better for SIDS. “These investors are going to help put us on the path to commercialization,” he said. “I particularly ask the venture capitalist fraternity to follow the lead of the investors behind Global OTEC,” as he appealed to them to join the Global Ocean Energy Alliance.

Prime Minister Tu’i’onetoa was supported in the Call To Action! for the establishment of the Global Ocean Energy Alliance by the two Vice-Presidents of the sixth session of the SIDS DOCK Assembly, the Honourable Rev. Wavel Ramkalawan, President of the Republic of Seychelles, and the Honourable John Briceño, Prime Minister of Belize, respectively, along with Dr. The Honourable Ralph Everard Gonsalves, Prime Minister of Saint Vincent and the Grenadines and former Vice-President of the third session of the Assembly of SIDS DOCK. They were joined by the Honourable Dr. Jorge Lopes Bom Jesus, Prime Minister of the Democratic Republic of São Tomé and Príncipe, where the first Floating OTEC Platform, being developed in partnership with Global OTEC, is expected to be deployed in 2024, helping to unburden the people of Sao Tome and Principe from importing expensive and dirty fossil fuels, and provide a demonstration for scaling up OTEC technology across small islands, coastal cities and LDCs and help achieve the Sustainable Development Goals (SDGs).

Grech said in the coming months, Global OTEC will complete the assessment of meteorological, geological, and thermographic properties around the island of São Tomé. This will inform a technically, economically, socially, and environmentally sound proposal to the government of São Tomé and Príncipe. “This proposal will put us on course to setting out a Power Purchase Agreement (PPA) and open doors with both multi-laterals and impact investors to continue executing this project, and with the establishment of the Global Ocean Energy Alliance, we will have a marketplace that will help accelerate the deployment,” Grech said.