Kingdom of Tonga’s Prime Minister Elected President of the SIDS DOCK Assembly, Promising Continuity In The Push For Greater Focus On Ocean Energy 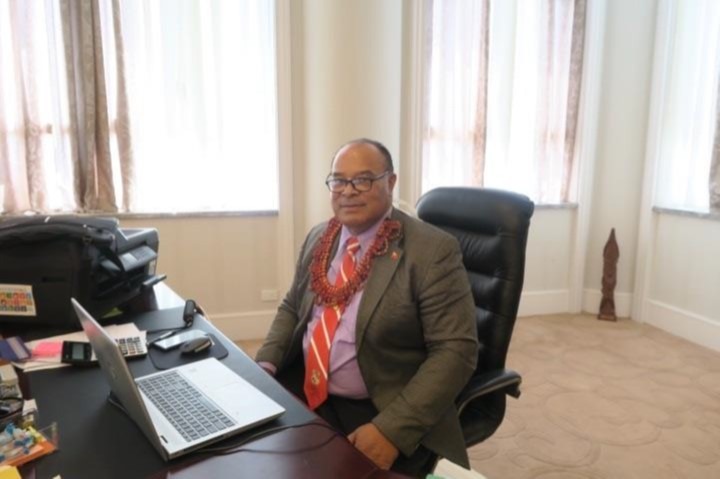 Kingdom of Tonga’s Prime Minister Elected President of the SIDS DOCK Assembly,  Promising Continuity In The Push For Greater Focus On Ocean Energy

Prime Minister Tu’i’onetoa has just completed an unprecedented second term as Vice-President of the fifth session of the SIDS DOCK Assembly, representing the State Parties to the SIDS DOCK Treaty from the Pacific Region, after assuming the Vice-Presidency due to the untimely passing of the former Prime Minister for the Kingdom of Tonga and Vice-President of the fifth Assembly, His Excellency Ak-i-lisi Pōhiva, on 12 September 2019, who was nominated as President-designate of the sixth Assembly in June 2019. In order to maintain continuity and to allow adequate time to Tonga, the Assembly decided during its fifth session, by unanimous consent and without setting any precedent, to extend the terms of the President and Vice-Presidents of the fifth assembly, for one year, at which time Tonga will assume the Presidency of the sixth session of the Assembly of SIDS DOCK. The terms of the President and two Vice-Presidents were again extended, without setting any precedent, due to the COVID-19 Pandemic, in 2020.

During the handing over ceremony of the Presidency of SIDS DOCK from the fifth President, Dr. The Right Honourable Keith Mitchell, Prime Minister of Grenada, representing the Caribbean Region, in his Opening Statement, on behalf of His Majesty’s Government and the people of the Kingdom of Tonga, and for the first time as Prime Minister and President of the sixth Assembly, Prime Minister Tu’i’onetoa announced a Call To Action! to support the Global Ocean Energy Alliance (GOEA): Ocean Energy For Climate Resilient Economies, which SIDS DOCK and its Partners, led by the Kingdom of Tonga, plan to launch at the 26th session of the Conference of the Parties (COP 26) to the United Nations Framework Convention on Climate Change (UNFCCC), that is scheduled to be held in Glasgow, United Kingdom, in November 2021. “Tapping into the wealth our oceans would give us that boost to not just enter the “Race to Climate Resilience,” but to stay in the race, he said. There is the little-known fact that, according to the United Nations Educational, Scientific and Cultural Organization (or UNESCO), the bacteria used to detect the presence of COVID-19 is found in the depths of the ocean. There are also vast amounts of minerals that reside at the bottom of the ocean that is destined to play a role in the Fourth Industrial Revolution (Industry 4.0), as promoted by SIDS DOCK’s Institutional Partner, the United Nations Industrial Development Organization (UNIDO).

For Tonga, the sustainable exploration of seabed mining, and also too for Pacific Islands such as Nauru, Kiribati, and the Cook Islands, is an option for economic development. Industry 4.0 promotes the upgrading of industrial enterprises, accelerates the deployment of renewable energy in manufacturing, saves costs, and enhances productivity. Seabed minerals are destined to enter the energy storage battery supply chains as cell phone demand increases, so too for the electric-powered automotive and electronics manufacturing companies, who are looking to seabed minerals for the long-term viability and sustainability of their supply chains. Tonga and other Pacific Islanders are known as Champions of the Oceans. As the only Pacific nation never to have been colonised, the Kingdom’s robust history, culture, and traditions are still a vital part of daily life. Ocean life is reflected in stories, music, song and dance, and carvings and tattoos. Like all Island People, surrounded by the oceans and the seas, these waters are the main source of protein and livelihoods and can provide almost all of the energy needs, and the untapped resources can dramatically change the socio-economic situations, for the better, the Prime Minister said.

The Prime Minister noted that while all the leadership of Small Island Developing States (SIDS) and low-lying developing states and coastal cities have been pre-occupied with combating the COVID-19 virus, they have not lost sight of the fact that almost all SIDS are ninety percent (90%) dependent on the importation of fossil fuels, which requires SIDS to spend tens of billions of dollars in foreign exchange annually, to import petroleum fuels.

“SIDS need to replace some ten thousand (10,000) megawatts of fossil fuel-powered electricity generating plants, over the coming decades, plants which consume more than $5 billion dollars worth of fuel, annually. Ten thousand megawatts represent the vast majority of existing generating capacity in the SIDS. However, because the majority of these plants have reached or exceeded their economic life and are no longer efficient users of fuel, we in SIDS must ensure that we take collective action to replace these generators with Ocean Energy Systems,” said Prime Minister Tu’i’onetoa. He continued by noting that SIDS face a huge dilemma as they consume diesel, which is expensive and dirty. “Before COVID-19, the cost of electricity in Tonga was thirty-seven cents (0.37) per kilowatt-hour, which is about three times more compared to the United States (U.S.) at ten cents (0.10) per kilowatt-hour. A year later, today, we are paying about forty cents (0.40) per kilowatt-hour, and climbing, and won’t be coming back down anytime soon,” he said.

The Prime Minister asked development partners to answer the Call To Action! and join the Global Ocean Energy Alliance to help protect and conserve the oceans and support the development of the SIDS Ocean Energy Work Programme. “We are seeking partners and we are looking to our oceans and in particular, ocean energy, as a principal source of energy to help a number of islands survive and thrive. This is the only true option we have left,” he said.

SIDS DOCK is a United Nations (UN)-recognised international organisation established in 2015, with all the rights and privileges for addressing climate change, resilience, and energy security in small islands. SIDS DOCK represents 32 small islands and low-lying developing states across the globe, and is so named because it is designed as a “DOCKing station,” to connect the energy sector in SIDS with the global markets for finance and sustainable energy technologies. The organisation’s work is coordinated by the Secretariat, in Belmopan, Belize. The Honourable Rev. Dr. Pohiva Tu’i’onetoa, Prime Minister of the Kingdom of Tonga is the current President of the SIDS DOCK Assembly.