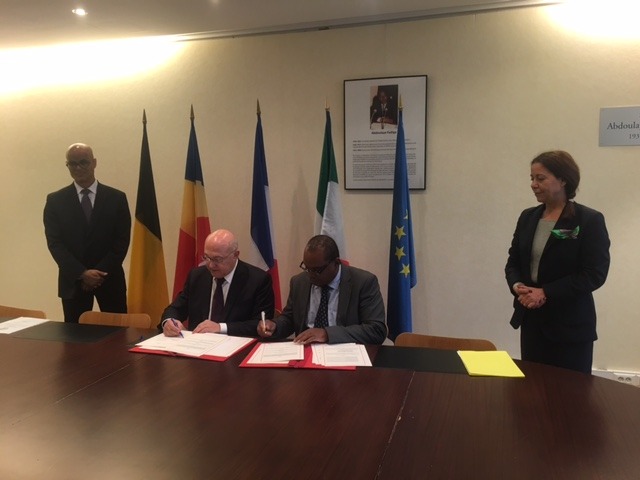 The Seychelles debt for climate change swap made a major leap on Friday when Minister Dogley signed the bilateral agreements for the debt buy back with the representatives of the governments of France, Belgium and Italy. The signing ceremony took place on the margins of the 3rd Edition of the Paris Forum on Debt and Development at the Ministry of Finance and Public Accounts, Centre de Conference Pierre Mendes France. The first agreement was signed with Mr. Michel Sapin, Minister for Finance and Public Accounts of France. Before the ceremony he delivered a key note address to the participants of the Paris Forum on debt management. Minister Dogley took the opportunity to discuss Seychelles participation in the 21st UNFCCC Conference of Parties in Paris with Minister Sapin, which is scheduled to start on Monday 30th November. Seychelles is planning to co-host a side event with France on the margins of the Paris Climate Summit on the debt swap initiative.

Second to sign was the representative of the government of Italy and third agreement was signed with the ambassador of Belgium to France. It is important to note that the agreement for the buy-back of US $ 27 million debt was reached in February 2015.

After the signing ceremony Minister Dogley delivered a statement to the participants of the Paris Forum on Debt and development on Seychelles’ debts swap for Climate adaptation initiative. After expressing the Seychelles government heartfelt sympathy and condolences to the government and people of France following the recent terrorist’s attacks in Paris, he highlighted the importance of the debt swap initiative to Seychelles blue economy and for overcoming its vulnerability to climate change. He told the delegates that never before has a country used its debt to create a financial mechanism to finance actions on the ground to mitigate and adapt to climate change. The Seychelles initiative is a world first; it is at the cutting edge of innovative financing for climate change adaptation. After the statement several developing countries delegates, especially those from SIDS, approached the minister wanting to know more about the Seychelles debt for climate change adaptation initiative.

Seychelles will sign two more bilateral agreements with the United Kingdom and South Africa later this year. This should take place before the 15th of December 2015, when the debt swap will be formally concluded with the Seychelles creditors.